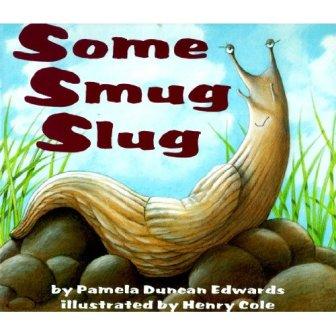 Confession: I am a slug sympathizer.

When I go hiking with others, the adults and kids always respond the same to slug sightings: "EWW!" I don't get it. I think the lowly slug is misunderstood. Give him a PR makeover.

Some Smug Slug only does further damage to the critter's reputation. Pamela Duncan Edwards portrays the slug as an obstinate dope who refuses to listen to the other creatures of the forest. Whereas in most tales a flawed central character changes for the better, the smug slug stays the same. He slithers up an unknown rise in the topography despite the alarmist cries from a spider, a swallowtail and a skink. The slug pays dearly in the end.

Edwards' text is an alliterative ode to the letter 'S'. "Slowly the slug started up the steep surface, stringing behind it scribble sparkling like silk." This constriction on word choice means that much of the vocabulary will be unknown to young readers (e.g., shambled, sinister, shantung). A key word in the final sentence may even require explanation to comprehend the story's ending. This is a story that should definitely begin as a read-aloud. However, with much practice, I can see some youngsters enjoying speeding through the story. Not as fun as tongue twisters or Green Eggs and Ham, but still something to smile through.

The illustrations, created by Henry Cole using acrylic paint and colored pencils, are exquisite. In fact, they serve as a springboard to a forest walk. Who wouldn't want to explore nature further after taking in his detailed, closeup scenes? And maybe that's where I take solace. While the story doesn't do slugs any favors, I think young viewers will still see a likable being based on Cole's art. A chance to stop and study them in person can only help their cause. Perhaps the book will inspire a future botanist.
Posted by GREGORY WALTERS at 5:39 PM