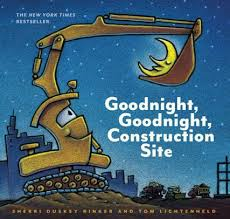 
If Goodnight Moon and Mike Mulligan and His Steam Shovelbore a picture book child, this would be it. This is a bedtime story for little ones who pass the day digging and building in sandboxes with tough trucks that create, demolish and rebound all to a soundtrack of animated whirrs and booms.


There is a time when construction workers, both young and old, must call it a day and when, as imagined by author Rinker, the powerful vehicles must shut down for the night.


The sun has set, the work is done;


It’s time for trucks to end their fun.


So one by one they’ll go to bed


To yawn and rest their sleepy heads

Her rhyming tale features the day’s end rituals of Crane Truck, Cement Mixer, Dump Truck, Bulldozer and Excavator. Illustrated by Tom Lichtenheld, each vehicle takes on a human quality as front windows or headlights become eyes and front hoods transform to mouths. When each engine shuts off, the reader says, Shh...goodnight, ________, goodnight.


My favorite illustration shows Crane Truck asleep while clutching a teddy bear as a shining star acts as a nightlight dangling from the boom hook. Having tossed and turned through a restless sleep last night, I feel complete envy for this endearingly sweet image.


No doubt, this will be a popular read night after night. I can envision parent and child whispering goodnight to each truck before the parent provides the final tucks and bids the child, “Shh...goodnight, _____, goodnight.” And,...lights out.


Who knows what construction projects await in the little one’s dreams?!
Posted by GREGORY WALTERS at 3:13 PM No comments:

HOW SANTA GOT HIS JOB


To be perfectly honest, I’ve never contemplated Santa’s employment history. I’ve never even thought of a pre-Santa Santa. Could it be that the guy was just a regular Nick? S.D. Schindler’s first illustration of Santa as a young man is indeed startling. He’s a red-headed, beardless, relatively trim guy, dressed in green pants and a brown jacket. (Yes, the red tie and red socks hint of things to come, but this is still radical imagery for a reader who has had only one view of Santa his entire life! It is nice to have things shaken up every half century or so.)


The story begins, as the title suggests, with a young Santa on the job hunt. It comes as yet another shock to discover that this affable, beloved icon couldn’t hold down a job in the early days.


Chimney sweep? Canned. Apparently, he was TOO skilled, shimmying into chimneys and cleaning ‘em up without a trace of soot on his clothes. Where was the proof that he’d done any work at all?!


As a postal delivery worker, he hated getting stuck in city traffic and chose to do his runs when streets were deserted in the middle of the night. Way back then, some people didn’t take kindly to signing for parcels at 3 a.m. Fired again. Humph.


As I read this story to forty children, they quickly picked up on the fact that Santa’s employment challenges could become assets in a career for which he was uniquely qualified. Why, of course, being Santa Claus was what the jolly old man was born to be!


Of all Stephen Krensky’s musings about Santa’s little known backstory, my favorite involves Santa’s circus days when he laughs too heartily being shot out of a cannon. Kids will love the entire tale. Adults can also take heart the next time they have to consider a career change. If it took Santa awhile to finally get it right, we can cut ourselves some slack, too!
Posted by GREGORY WALTERS at 5:51 PM No comments: