If you’re Canadian, Tim Horton is a household name.  Nowadays, the name immediately conjures up images of sugary donuts, hot coffee and “Roll up the Rim” cups, but many of us still know the popular food chain took its name from its co-founder, a hockey legend who played twenty-two seasons in the NHL, most with the Toronto Maple Leafs.  It’s a no-brainer that (Canadian) kids will eagerly give The Mighty Tim Horton a read even if its standard word count exceeds that of current picture books.


The story is told from the point of view of Trevor, a boy who struggles to define his role on the ice.  Bigger than his peers, he throws his body around, resulting in too much time in the penalty box and on the bench.  His coach gives Trevor an ominous message:  “If you keep this up, there might not be room for you on the team.”  While Trevor wants to change his game, he doesn’t know how.


Then one day he goes out with his father to try to raise money for the team by selling Christmas cards.  It proves to be a tough day as few buyers shell out money in the Toronto neighborhoods.  They try one final street before heading home.  (It always comes down to one final try, doesn’t it?)  Trevor knocks on a door and, sure enough, Tim Horton opens the door.  Good ol’ Tim buys the final box of cards, but the excited boy tells his hockey hero of his struggles on the ice.


Tim takes the time to offer four tips to becoming a better defenseman (e.g., “get the puck out of your end as quickly as possible”).  With specifics to focus on, Trevor has no time to waste throwing his body around as an agitator.  Tim’s improvement parallels the Leafs’ successful Stanley Cup run.


Greg Banning’s  illustrations are exceptional, combining the look of photographic realism with a nostalgic tip to Norman Rockwell.  The facial expressions are vivid, but highly sanitized...sort of like a Brady Bunch depiction of family crises.  Even when Tim Horton checks a player into the boards, it comes off as an aw-shucks-move-aside maneuver.  Gosh, were hockey players of yesteryear perfect gentlemen?  Maybe playing without helmets led players to hold back a bit on aggressive play.


I have always found sports stories to be a challenge in hooking the reader.  Reading play-by-play descriptions does not match the excitement that comes from playing or watching a game.  That’s why it often fails when we think the way to excite an athlete about reading is to have him read stories that feature his favorite sport.  Mike Leonetti’s story does build, but the portrayal of the action in games comes off like a dry rundown of highlights.  There is little in the way of crowd reactions, no imagined dialog and not much suspense.  We know Tim (and Trevor) will succeed.

While I think the book is worth a read, I am concerned how Horton is idolized.  “Nobody ever got past him along the boards” is an unnecessary overstatement.  Moreover, the end page, entitled “About Tim Horton” fails to fully disclose the circumstances regarding Horton’s death.  All that is said is, “He died in 1974 as a result of injuries suffered in a car accident.”  I have always felt a connection to Horton, probably more due to his donut legacy, due to the fact the first Tim Hortons opened in my hometown the year I was born.  However, I remember the image of Horton’s wrecked car splashed across the front page of The Hamilton Spectator and my father taking the opportunity to comment about the tragic loss, a life ended too soon, the result of driving recklessly at 100 miles per hour.  Later I learned that alcohol played a part in the accident.


When we portray sports stars idealistically and cast them as heroes, they become as unreachable as Greek gods.  Tim Horton was human.  While there are lessons to learn from his life on ice, there are also important conversations to be had over his tragic death.  Kids deserve the whole truth.
Posted by GREGORY WALTERS at 7:25 PM No comments:

THE BOY WHO LOVED WORDS 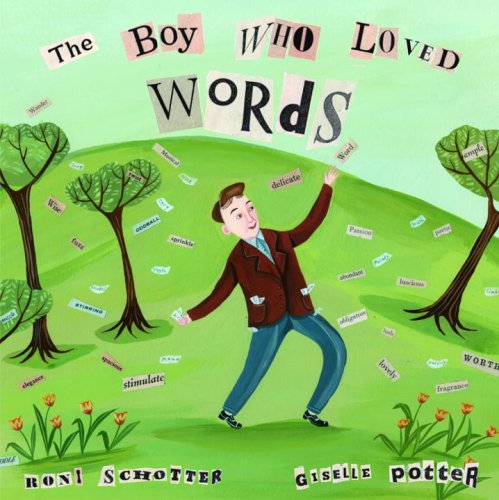 
Occasionally, I pick up a picture book that I know will not appeal to children.  Not without an adult to decode and champion it.  The Boy Who Loved Words is such a book.  I can see a teacher unveiling it, celebrating it and turning it into a class mainstay.  I can also see it collecting dust and then getting passed over in the 25¢ bin at a library discards book sale.  That would be a shame.  Sometimes the adult has the power to make or break a children’s book.


This is the story of Selig, a boy who, as the title states, loves words.  He knows what writers and crossword puzzle fanatics know:  certain words have a perfect pitch to them.  They fit precisely in contexts where the generic lot (i.e., nice, big, very, awesome) should be shunned.


Selig’s parents fret over the fact that he seems to be more of an observer than an active participant in life.  While other children play, Selig takes in “delicious” words, adding them to his growing collection, jotted down on pieces of paper that fill his room and pant pockets.  Selig is ridiculed by classmates who cast him as an oddball.


In a dream, a genie counters the criticism.  “Oddball?  Feh!  You are Voidsvoith, a lover of voids.  Already you have vhat people search their whole life for—an enthusiasm, a passion.”  It is only when Selig attaches all his collected words to the branches of a special tree that he discovers a purpose for his passion.


Illustrator Giselle Potter’s muted illustrations, comprised of goache, watercolor and collage, complement Roni Schotter’s carefully considered text.  Key words that catch Selig’s attention are printed in italics and defined in a glossary at the back of the book.


Reading the book prompts me to reflect on my own favorite words.  Certain words stand out oh so briefly while reading an article while others are mainstays in my own Word Hall of Fame.


Abhor.  I love writing it in cursive, feeling the flow from the b to the h.  I marvel at how such a runt of a word, with five letters and two syllables, can pack such a punch.  (Its four-letter, one-syllable cousin, hate, is so overused.)


Scapegoat.  I once had a discussion in a fourth grade about determining the origin of the word and suddenly we were visually goats on the loose in the city and in the country, irate trolls, frantic farmers and job-in-jeopardy border collies in hot pursuit.  When blame gets attached to goats, I feel it is my mission to visit petting zoos and give the bearded grazers an extra handful of feed.


A few other favorites:  daresay (thanks to required readings of Brontë sister novels in high school), wonky, vacuum (double double!), lollygag, behemoth, supercilious, din, brouhaha .  For those of you who still insist on spelling tests, kids will jump all over antidisestablishmentarianism as a BONUS word even though I have never heard anyone use the word in proper context aside from remarks about long words.


While I used to hate abhor vocabulary definition assignments and multiple choice vocab tests, discussing word discoveries that arise during reading can be lively, imaginative and ultimately memorable.  Selig would agree.  I can see a classroom teacher igniting the passion over words in students, even taking a literal leap from The Boy Who Loved Words by drawing a massive tree in the classroom where students add their favorite word discoveries.  It would certainly prove more memorable than a series of vocabulary worksheets.  What are your favorite words and why?  I’d love for you to share them by posting a comment!


More than a mere homage to choice words, The Boy Who Loved Words honors the dreamer, the introvert and the nonconformist who sees life in a different way.
Posted by GREGORY WALTERS at 7:39 PM 5 comments:


We’ve all had the misfortune of being rudely awakened by unwelcome noises.  I recall motorcycles revving, a dorm fire alarm blaring and the Northridge earthquake roaring and rumbling.  Fortunately, most mornings open with a predictable song, the instrumentation played by a melodic robin, an overactive furnace and/or an itchy dog.


Wake Up, City is an ode to the morning noises in the urban jungle.  Susan Verlander provides seventeen sounds one might hear inside a home and on the busy streets of the city.  My favorite pair:


Each description is accompanied by a bright digital illustration using Adobe Illustrator.  The colorful images will awaken even the sleepiest reader.


I bought this book years ago, thinking it would be a wonderful tool for showing young writers how they need to consider all the senses when composing a story or describing an object or scene.  Kids readily attempt to add language about what they see but too often the other senses get short shrift.  Wake Up, City will remind writers to be more attuned to the sounds in a setting.


I worked with a grade one class in creating a class book for their rural community since the sounds are so different in their environment.  We brainstormed ideas, following Verlander’s pattern of identifying a perons or thing and attributing an action verb about a noise the person or thing makes (e.g., in Wake Up, City, “subways rumble”; in Halfmoon Bay, pine trees rustle).  Each child took one idea to write and illustrate.


I would also use this book with an energetic group, first clearly defining each noise to expand vocabulary and then having them act the sounds as I reread it.  This active involvement makes the learning memorable, increasing the likelihood that the actors will use the terms as writers and speakers.  Regardless, the acting is just plain fun, likely leading to encore reading/acting opportunities.

In general, as a quick read or a writing/acting prompt, Wake Up City will make students more attuned to the sense of sound.
Posted by GREGORY WALTERS at 8:33 PM 1 comment: