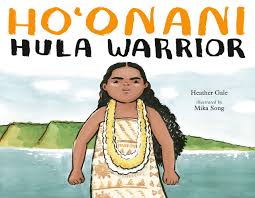 There is much we’re learning about gender identity. If it’s confusing and maybe overwhelming for adults, imagine what it’s like for a child, born in a body representing a particular gender and yet feeling it’s not the right fit. The feeling is not a passing curiosity; it stays with the child, a persistent thought. Who do you talk to? How do you explore this seeming mismatch? Imagine, too, what it’s like for a friend of this person. How do they ask questions, understand and support?

Picture books can help us all begin to process things we may have never considered. They can help children who feel they don’t belong suddenly feel connected. That character is like me! It’s even more satisfying to find a book about gender identity that is told in a culturally diverse setting.

Heather Gale’s Hoʿonani: Hula Warrior addresses the grays of gender within the context of Hawaiian culture. The story’s main character, Hoʿonani, is based on a real person, Hoʿonani Kamai, raised in Honolulu. While “girl” is wahine in Hawaiian and boy is kāne, “[s]he preferred just Hoʿonani.” The book notes that, in traditional Hawaiian culture, māhū people “embraced both feminine and masculine traits” and had a role “as healers and as caretakers and teachers of ancient traditions.”

Hoʿonani’s mentor is Kumu Hina, another real person whom we’re told in the author’s note is a Hawaiian cultural practitioner and the first transgender candidate to run for state office in the U.S. (Based on how the book is written, both Hoʿonani and Kumu identify with female pronouns.) It is Kumu who announces that, as part of a high school cultural event, the kāne (boys) will peform a traditional hula chant. Hoʿonani is neither a boy nor in high school, yet she wants to try out and Kumu encourages her to do so. To be accepted, Hoʿonani must be strong and convincing in her warrior stance, in her movement and in her delivery of the chant. Not only is she accepted, she is selected as the leader.

This book is based on the twenty-five-minute PBS documentary A Place in the Middle. It’s worth watching after reading the book to gain more context and to see that this story is not simply a fairy tale version of reality. Truthfully, I felt Kumu Hina came off as a bit too stern, perhaps even harsh, in the documentary, but seeing Hoʿonani on video will be especially worthwhile to convey to children how utterly normal she is. This is important since children may feel awkward in understanding who Hoʿonani based only on two-dimensional drawings in a picture book.

For opening minds about gender and Hawaiian culture, Hoʿonani: Hula Warrior is a worthwhile read.

Posted by GREGORY WALTERS at 2:11 PM No comments: